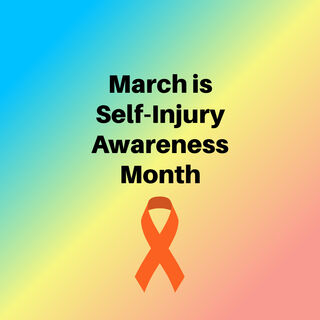 Before finding emotional health and greater well-being, they struggled with self-injury.

Self-Injury is a deliberate, non-suicidal behavior that inflicts physical harm on one’s body to relieve emotional distress. Self-injury has a paradoxical effect in that the pain self-inflicted actually sets off an endorphin rush, relieving the self-harmer from deep distress.

It’s important to note that self-injury does not involve a conscious intent to die by suicide – and as such, the clinical term for this behavior is called Non-Suicidal Self Injury (NSSI). NSSI can take many forms from cutting, picking, burning, bruising, puncturing, embedding, scratching or hitting one’s self, just to name a few.

In its simplest form, NSSI is a physical solution to an emotional wound. Generally, it is a deliberate, private act that is habitual in occurrence, not attention-seeking behavior, nor meant to be manipulative. Self-injurers are often secretive about their behaviors, rarely letting others know, and often cover up their wounds with clothing, bandages, or jewelry.

Symbolically speaking, deliberately injuring one’s self can be viewed as a method to communicate what cannot be spoken. With self-harm, the skin is the canvas and the cut, burn or bruise is the paint that illustrates the picture. Most individuals who self-injure are struggling with emotional expression. This clinical experience is known as alexithymia – the inability to recognize emotions and their subtleties and to understand or describe thoughts and feelings. Many other self-harmers are struggling with internal conflicts, may have anxiety, depression, may have experienced physical or sexual abuse, or other more serious psychological concerns.

Statistically speaking, approximately 4% of the population in the United States uses NSSI as a way of coping. Individuals who self-injure are represented in all SES brackets in the United States with the behavior usually starting in adolescence. Girls and women tend to self-injure more than boys and men, but this may be represented by the fact that females tend to turn to professional help more than males.

Those Who Self-Injure Are Often Trying To:

* Distract themselves from emotional pain

* Express negative thoughts or feelings that cannot be put into words
* Self-nurture or self-care
10 Tips for Reducing Self-Injury
1) Create an Emergency Kit. Place positive things in your kit like photos of people you love, notes to yourself or from friends or family, a journal for writing, markers or art supplies for artistic expression, an inspirational poem, beloved stuffed animal, upbeat music, favorite scents, things like that.

2) Use positive imagery. Visualize yourself moving through your painful moment without self-harming. Research shows that using positive visualization can keep you in-the-moment which is a key tool for recovery.

3) Hold your ground. Sensory Grounding experiences like holding something soft, listening to soothing music, drawing or writing, for example, can interrupt the trance-like state that often comes with self-harm, shifting you towards more positive behaviors.

4) Reboot your mind. Reframe your thoughts toward helpful statements, also known as Cognitive Grounding Skills, like “Who am I really mad at?” Or “What is setting me off?” Or “I am safe and I am in control.” These can re-orient you to the here-and-now.

5) Know your triggers. Become aware of what issues bend or break you. Try to dilute your exposure to them, call upon others to help you move through them and remind yourself that you can emerge from them successfully.

6) Take a detour. Reroute self-harm by using less severe forms of sensations. Holding an ice cube, tearing or shredding paper or a sheet, snapping a rubber band against your skin, sucking a lemon peel are ways to dilute the need to experience pain.

7) Move your body. Consider the adrenaline rush of running, dancing, holding a yoga pose, jumping rope to offset urges to self-harm. The rush of adrenaline has been known to produce the similar chemical surge that comes from self-injury.

8) Forgive yourself. As you try to interrupt your self-harming behaviors, know that it may not come as easily some days as others. Should you find that you’ve lapsed into self-harming, remind yourself that change is a process. Learn to forgive and be kind to yourself as you start anew.
9) Be supportive. If you know someone who may be self-injuring, offer support and try not to shame or criticize the NSSI behavior. Self-injury behaviors can be successfully treated, so help your friend or family member by encouraging them to seek help.
10) Consider calling a therapist. Remember that having an urge to self-harm is not the same as actually self-harming. If you can distract yourself from self-injury, you are well on your way to recovery. However, if the urges win out, not allowing you to reduce your self-harm behaviors, consider working with a professional.